Rosharon, TX, 4/18/14–“Skydiving! She’ll never suspect that!” So says Houston firefighter Clint Meade of the way he chose to propose marriage to his longtime girlfriend Whitney Greco last weekend at Skydive Spaceland. “I could have asked her at McDonald’s and she’d have said yes, but this was much better,” he said with a grin.

“I was looking for something exciting for us to do together, and we’d already gone tandem skydiving once and loved it,” he explained. “I woke up that day and said I’m going to wear a tux skydiving like James Bond for the proposal.” He hid the tuxedo under a skydiving jumpsuit so Greco wouldn’t suspect what was going on.

What drew the two together? After meeting in a bar, the couple found that they were a perfect match. “I love Clint because he is the most driven and goal-oriented man I’ve ever met,” said Greco. “When he puts his mind to something, it happens.”

“She’s just awesome,” explained Meade. “It sounds dumb when I say it like that, but I’ve never been around someone I could totally be myself with, whether I’m being a jackass like around my friends or being what she needs me to be at other times, and she’s the same person all the time. We’re opposites—she’s artsy and I like manly stuff—but we really like doing things together and it just works.”

Meade planned everything with the Skydive Spaceland staff for the perfect proposal. A “Will you marry me?” sign was laid out in the landing area after the pair took off, and Clint jumped and landed first, stripped off his skydiving jumpsuit to reveal the tuxedo, and got the ring in hand for the proposal before Whitney and her instructor landed.

“It was completely awesome, a double adrenaline rush in one day!” said Greco, who didn’t suspect a thing. “Raul (my instructor) asked if I saw the sign when we were getting ready to land and it took me a second to process it, it was so cute! Then I saw Clint and I could tell he was nervous; his shoulders were shaking like he was getting ready for something. I couldn’t get down to him fast enough; I wanted to get back in freefall to get there faster!”

“I was freaking out,” Meade recalled. “My instructor Jeremy said we were going to jump first and spin the parachute all the way down so we could get down quicker for me to get ready for the proposal. It was so much fun all the way down! But I was so nervous because I thought she was closer than she was behind me, my buddy was helping me get my collar fixed, and I kept thinking, ‘She can’t see me yet, I gotta get it right!’ “

The couple plans to jump again on Easter Sunday. “We’re going to go to church of course, and we figured why not celebrate Jesus and each other by jumping out of a plane again on the same day?” said Meade.

“The second jump was so fabulous; I liked this one more [than the first],” said Greco. “I knew more about what was going on and I was just more aware. The first time, you’re so pumped your brain doesn’t really comprehend it, but this time it seemed like the freefall was longer, and I could see the city of Houston on one side and the ocean so blue on the other. It was so beautiful. I can’t wait for the third jump!” 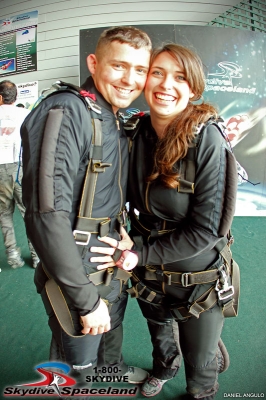 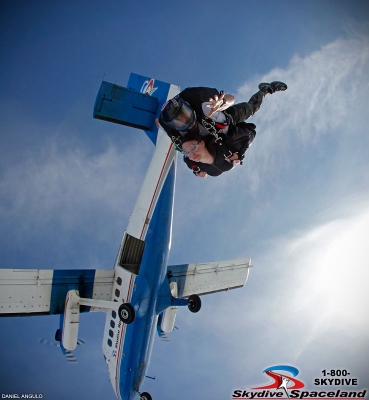 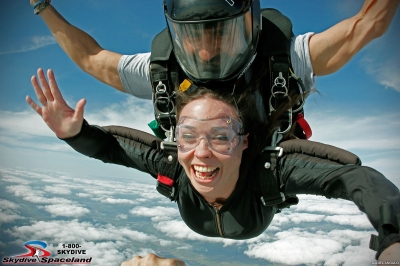 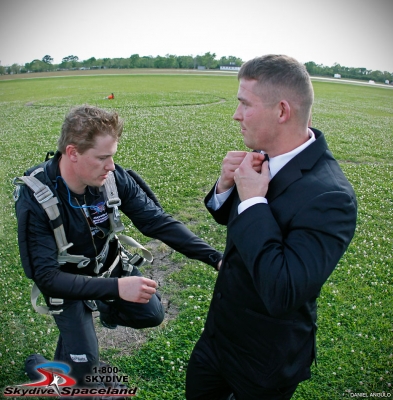 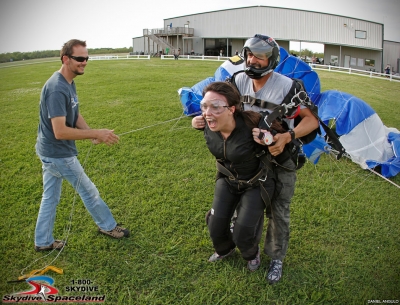 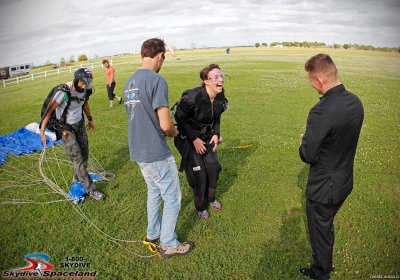